First day of the season.  Started off slow with snow melt from the night before and carrying a bit of extra water.  Started off with a team of nymphs in some fast deepish water  and managed to pick off the odd few fish up to around 1 1/2lb.  By mid day there was a prolific hatch of ldo's and brook dunns/March browns.  At first there was nothing rising to them but as I sat down for ten minutes and just watched eventually the fish started looking up.  I switched from a team of nymphs with a french leader and replaced them with a 15ft leader one of my variations of a brook dunn/march brown.

As I put my first cast across a rising fish the fish rose and I set the hook.  As I was playing the fish the heaven's opened with hail, snow and rain all at the same time so after quickly releasing the fish of around 1lb I scarpered and run for cover.  After it stopped hailing, snowing and raining I carried on with my fishing.  The rises had stopped but the flies were still on top of the water so I knew that it was only a matter time.  As I made my way up through the runs I could spot out some dimple rises up against the bushes.  In the past I have caught some really good fish there so I was pretty confident of a good fish and I was not disappointed.  I managed to catch 2 monster fish and it was only the first day of the season.  I managed to loose another really good fish before heading off home to pick the kids up from school butbi will be back tommorrow

A Couple of Heavy Bugs For The Ladies

Asyou can tell by the lack of posts this year I have not been out much. Between juggling work and moving homes I have had no time to myself.  Which means my fishing and fly Tying has been effected (BADLY).  This week i saw myself having some spare time (At last) and managed a couple of hours fly tying and decided on some big heavy nymphs for the ladies.  Here are a couple which I managed to tie up.


A variation of Hares ear and Ptn's with a copper and red copper ribbing, 5ml, 3.5ml and 3ml tungsten beads and tied on a Hends BL120

Fed Up Of Tying Bugs & Dries For Next Season

Over the past couple of weeks i have been non stop tying up nymphs and Czech nymphs and am getting a little fed up with it all.  So have decided to start on the dries for the up and coming season when there will be March Browns, large Olives Massive brook Dunns on the water for trout of all sizes to feed on.

Below are a couple of my go to dry flies from last season and what i have been tying up lately.

If you had to choose any of the above for your stream or river which would you favour??

With the heavy rains and blustering winds no one has been able wet a line in a couple of weeks unless you are fishing the chalk streams which rarely ever flood.  So a lot of us have had to settle for second best and tie up a load of flies ready for when the river levels drop and are able to safely fish he rivers.  Here is a short video of a few flies which I hope to give a go when the time is rite.

Finally Some Rain...... And Fishing

I have not been out a great deal this year down to two reasons.  One down to work commitments and the the second that the rivers here in South Wales have not had a great deal of water making the river's and streams desperately low with hardly any fish feeding untill later on in the evenings when the spinner falls are hatching their eggs on the water and dying which at this time i am in work :(

However after the recent rains i gave the stream a couple of days to run off and get back to normal level.  The stream now is crystal clear and not a sign of alga or weed on the rocks with plenty of fly hatching in the fast ripply waters.  I was using my 7ft 3# Hardy Featherweight as i always do on my stream outings which is perfect for casting under over hanging tree's and branches on the small streams here in South Wales.  My fly of choice as always on the stream is an Olive Klinkhammer tied on a size 14 Kamasan B100 grub hook as i find that the fish are able to take the hook more easier than the conventional klinkhammer hook aswell as the hook is not as heavy.

Any ways back to the fishing :)  I started off a little early in the day around 10:00am and the water was still a little cool from the night but i could see the odd rise or two in the pocket waters.   I fish a fairly short line around 10 yards at the maximum as i have found that on small streams if you have too much line out and you strike at a rise more than most of the time that fish will get free of the hook due to slack line.  I managed to fish and catch fish behind big boulders and over hanging tree's But then spooked all the fish in the long calm pools (As i always do).  As you can see in the image i was at the end of the run and i managed to spook the entire run with a bow wave.

Aafter catching a good number of fish i decided to have a look around a couple of runs and underneath rocks in the spots which have already fished.  I noticed a good number of stone loaches and an abundunce of small fry which i s a good sign of how healthy the stream is becoming after it got polluted by Welsh Water a number of years ago and the hard work done by South East Wales River Trust .  I am for sure going to fish the stream a lot more before the season is out when i get the time off (even for an hour or two).

Here are a couple of pictures of the day.  I hope you enjoy them. 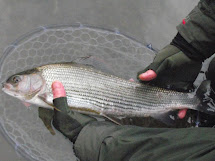